This post is about our reflections.  Those wonderful people who hold up the gorgeous, polished mirror for us every day.

This morning I listened to a friend talk about how her low self-esteem and how her family enforced the idea that she was never good enough.  I thought, “It’s sad that her parents gave her that belief, but it’s even sadder that she still believes it.”  I wanted to ask why she still bought into that.  (Ironic that I was invalidating her, too.)

I realized then that she was a reflection.  How do I do that?  How do I spout decades-old beliefs about myself as if a) they were true or b) I couldn’t change them to whatever I wanted?

I know how the mind works and its pre-disposition to the negative, to the habit, and to the usual pattern.  BUT, if I do some simple math and accounting and add up the time for all of the “bad” things I’ve done and have been done to me, they maybe add up to one day (with some contingency) total.  But let’s say one day.  Now comparing this one day to the over 22,630 days I have lived up until now, why would I add one more second to that side of the ledger?  Why?  More importantly, why would I be the one doing it?

Time to shift my attention.  Thanks, Reflector.

Do you believe in your own innate goodness?

This morning I put seed out for the birds (23 degrees – not too bad).  Crunching along the deck I noticed this floe coming off of the deck railing.  How did it becom 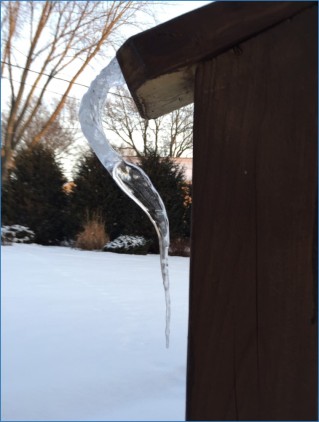 e curved?  Why did it angle out as far from the wood as it did?  Why did the composition look different in the top part of the floe?

I wondered about the things that shape us throughout life.  The big things seem like the obvious answer, but I don’t think that’s what does it.  Like this ice, it is the persistent, subtle influences that do the  real shaping — factors I don’t even consider to be shapers: identifying as female, being white, born American, born middle class and midwestern, family beliefs about working hard and doing your “fair share,” etc.

How can I shift my viewpoint to gain a perspective as if outside of those factors? What will I see, feel, (and if I change the belief) experience?

This all started with a random thought (a judgment) about another I mentioned in a previous post, The Opposite of Lying.  “She’s lying about that and it’s affecting her life and she doesn’t even realize it.” Drat. If I thought that, it must also be somehow/mostly/completely about me. How do I do lie?  What is The Truth?

In the wonderful way attention works, I read this passage yesterday. Although the author was laying the foundation for concepts, it’s applicable.

“When something is held to be true or real, existing outside of our imagined, we hold it in a different category than something that’s known to be just a concept. So does that mean that what we define as true is something we believe exists outside of our imagination? In doing so each of us frequently perceives an idea as if it were a self-evident truth.

On the other hand, if you realize that these attributes are conceptual in nature, immediately you will experience the possibility that you can change them or get free of them altogether.” Peter Ralston, The Book of Not Knowing

ah-ha! A lie requires believing an idea to be true.

Where am I lying? My being is true. Only thoughts or ideas I have are possible to be lies. Saying them is the manifestation of my thoughts about myself or thoughts about another through myself. (I’m already solid on “there is no other.”)

Where am I lying? Lies to my self rely on an idea of should-self. I should be making more money. I should have a new car. I am better than her. I am not like him. I am right. You’re doing it wrong, etc…

“You cheated on me.” “No, he doesn’t mean anything. I love you.” Are both of these lies?

How about the deflector method? “You broke my favorite cup.” “Technically, the cup, when acted upon by gravity, broke itself when it encountered a denser object – the floor. It was the Earth’s fault.” This is angels-dancing-on-the-head-of-a-pin semantics.

A lie requires believing an idea to be true.

This is not a syllogism, though. All ideas are not lies. Ideas and concepts are just that – something in my mind, my imagination.  But. . . lies exist only in the imagination, therefore truth lives only there, too.

Where am I lying? I have a lot of answers now and a clear idea about the beliefs that need rooting out and why I reflected the judgment on to another.